All vehicles, including your BMW, have an oxygen sensor, commonly referred to as an O2 sensor. In fact, most cars have at least two, if not more. The O2 sensor is needed to record the amount of oxygen that is present in the exhaust gases. The front O2 sensor is found in the exhaust system before the catalytic converter. The rear O2 sensor is found in the same system but after the front O2 sensor. Four-cylinder engines have at least two oxygen sensors, while V6 and V8 engines will have four or more.

O2 Sensors are Necessary in your BMW

Knowing how much oxygen is found in the exhaust system and within emissions is important. The information given by the front O2 sensor helps the Powertrain Control Module (PCM) to adjust the air-to-fuel ratio inside the engine’s combustion chamber by adding or taking away fuel.

The rear O2 sensor reports on the performance of the catalytic converter. Some modern cars have switched out the front oxygen sensor for an air/fuel ratio sensor. This works on the same principle as the O2 sensor but is a bit more precise.

How the O2 Sensor Works

There are many different kinds of O2 sensors, but the most common is known as a voltage-generating oxygen sensor. The basic principle of this type of oxygen sensor is simple. The device generates an electrical voltage in proportion to the differing levels of oxygen found inside and outside of the exhaust. It operates thusly:

The O2 sensor operates at this lower voltage when the air-fuel mixture inside the engine is lean, which means that there is more air than there is fuel. This means that there’s an excess of oxygen in the exhaust, so only a small voltage is needed to record the difference.

When the car is running rich, which means there is more fuel than air, the O2 sensor will operate at a higher voltage to offset the difference between the oxygen found in the exhaust and the oxygen found outside.

When the O2 sensor starts to fail, it lets the driver know by one of 3 signs. Let’s take a closer look at these:

The engine management light is known to many drivers as the check engine light. It is controlled by the ECU (Electronic Control Unit) your BMW’s main computer. When the PCM detects an issue with the oxygen sensor, it will alert the ECU, which can then alert the driver with the engine management light. The EML can come on for many reasons, which is why when the light illuminates and error code is also sent out. The error code can be read using a diagnostic reader. This helps the individual working on your BMW to properly diagnose the problem.

If you find your BMW doesn’t achieve its usual gas mileage, then you might want to explore the status of your O2 sensor. The PCM relies on the O2 sensor for accurate readings regarding the oxygen levels inside the exhaust fumes. Without this information, the PCM won’t be able to know if the engine is running rich or lean. When the engine is running rich, it means that too much fuel is being used when compared to the amount of oxygen. The car will still run, but not as efficiently, and it will guzzle lots of fuel, meaning you need to visit the pumps more often.

While running lean or rich, the engine will still function, but it won’t operate anywhere as well as it should when the air and fuel in the combustion chamber are in perfect balance. This means that when the O2 sensor is faulty, your BMW won’t operate as designed. You’ll likely experience jerky acceleration, misfires, and rough idling.

If you notice a drop in the performance of your 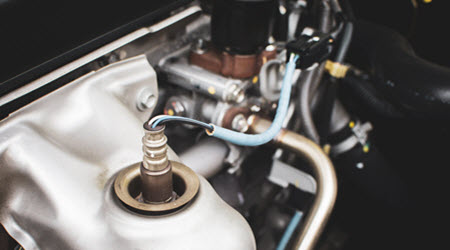 BMW and are driving through or around Battle Creek, Portage, or Kalamazoo, MI, then stop by our shop for a chat and an inspection. At Master Mechanics Auto Repair, we put the customer first and will always be honest in our assessment of your vehicle. We’re a friendly bunch, so don’t hesitate to call or stop by for your BMW maintenance and service needs.